A little over a month after delivering final plans for its most recently approved project in Reynoldstown, Fuqua Development is back at it again with a signature mixed-use, according to the Atlanta Business Chronicle.

If Principal Jeff Fuqua has his way, the project would stand on four acres along Monroe Drive near 10th Street and next to Park Tavern, immediately neighboring Piedmont Park and the Beltline’s Eastside Trail.

The ABC reports that the development is said to include apartments, town homes, and a boutique hotel. A natural food grocer and several chef-driven restaurants could line the Beltline.

Atlanta City Councilman Kwanza Hall is cited in the article as being supportive of the project and its “potential” to become part of a larger transit-oriented development around Monroe and 10th Streets.

If the proposed development will be anything like what Atlanta is used to seeing from Fuqua, many could agree that its location relative to Piedmont Park and the Beltline would be questionable in a city which currently has a ParkScore of 51 out of 100. Although, the project’s relatively small size could be its saving grace.

When Beltline officials were soliciting bids for the prime property, one concept that stood out was The Terraces on the Park, designed by Smith Dalia Architects, for which renderings emerged when the design was recognized by AIA Georgia. Fuqua’s relation to the project, if any, is unknown. 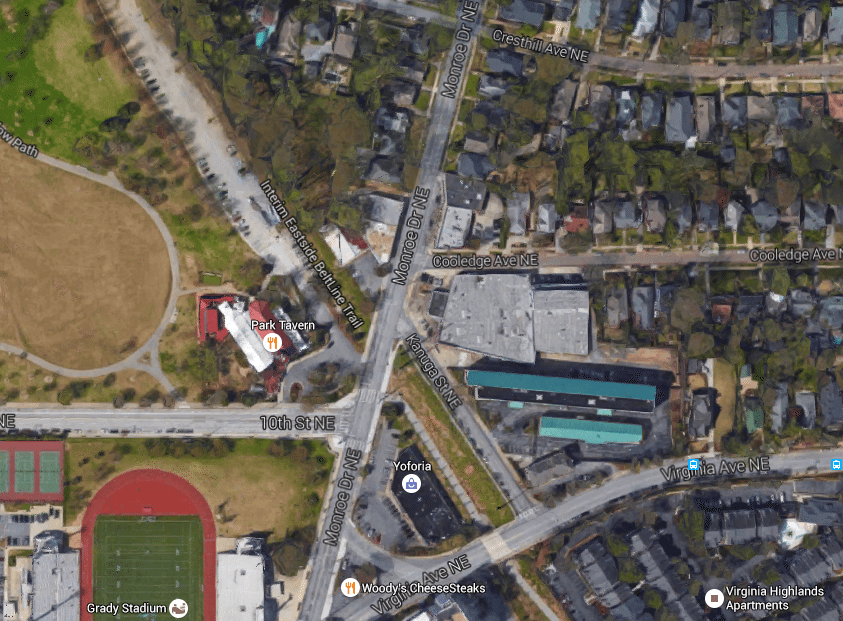 Editor’s Note: Details about the hotel, apartments and town homes were added 6/24 at 9:53 AM.

At this point we should just start calling it Fuquanta.

I like Fuq-lanta better. It’s more phonetically in-line with how most feel about them.

I don’t think this will jive well with beltline culture.

This area is already a complete traffic nightmare. Monroe and 10th cannot handle the existing traffic. Adding another mixed use multiplex is just absurd. Let’s talk about how to make the intersection of Monroe/10th/ Beltline and Piedmont Park a little more safe and manageable before we start adding more fuel to the chaos. Does anybody have another idea than the overplayed Mixed-Use that Fuqua is throwing all over town? Come on Kwanzaaaaaaaa, you should know better!

While Fuqua doesn’t really deserve the benefit of the doubt, I think we should wait and see what they propose before we just nix the whole idea. With or without this project this intersection needs to be addressed.

Piedmont Park would be a great place for any event “IF” they didn’t use so many cancer causing poisons as pesticides on the grounds. Such a shame too as so many dog owners take their pets there thinking this is great for them when in fact they are the closest to the ground and get the effects before we do. How many animals (pets) around the park are getting or have died from cancers? I bet many. This is also why we see no bees in the park as well. Bees no longer exist in the park due to the… Read more »

Unreal. Fuqua always picks the worst possible locations for their stupid projects to inflict the maximum possible traffic pain.
Monroe and 10th are already traffic choked. As is Cheshire Bridge and Piedmont. And Roswell Road and Wieuca. And all the other places their insane projects have gone up. Does anyone do a traffic study to determine traffic impacts before they greenlight these monstrosities??

@Mike…not really…because in Atlanta, if every development were halted due to traffic, nothing would ever be built

We have to view traffic less as an excuse to stop new development and more of an impetus to improve other mobility infrastructure.

Then maybe the powers that be should focus on expanding public transit before adding more structures.

It has to go hand-in-hand. Transit can’t work without density, and vice-versa.

Transit can’t be improved in this city as long as people continue to vote against funding it. The problem is we’re bringing people in but they have no alternate transportation options yet, so it is just increasing traffic. Until people are willing to have their taxes go toward public transit, the traffic is just going to get worse.

The comment about bees is silly — there are bees in the park, not to mention two huge beehives Piedmont Park Conservancy has built in the learning gardens near the dog park

Where is it supposed to go?? There is literally no space. These carpetbaggers will try to shove a mixed use development anywhere. It’s already a traffic nightmare over there.

Im glad people are sick of being stuck in their cars. New developments allow for people to live somewhere they don’t have to commute as long, and thus, help alleviate congestion by removing a few vehicles from the roads.

Exactly. I struggle to understand how it is that people cannot grasp this. And I’ll reiterate my comment to Amy earlier up in the thread. You have to develop transit and density in tandem as they depend on each other.

That should be AIA Georgia. AIGA is a group of graphic designers.

In addition to its medical office space, the development will feature grocer-anchored street-level retail and a ground-floor atrium including a cafe area.

'Near overwhelming demand' from potential restauranteurs for the newly-renovated space is forcing a first-ever open-house-style-showing for Pellerin Real Estate.