Susan DeRose on Friday had staff remove the decades-old fixture in the diner after mounting backlash over the restaurant's cryptic 'Lives That Matter' banner. It will be auctioned off with proceeds supporting the police.

This post is an update of: OK Cafe Co-Owner Responds To Cryptic 'Lives That Matter' Banner, Addresses Georgia Flag Art 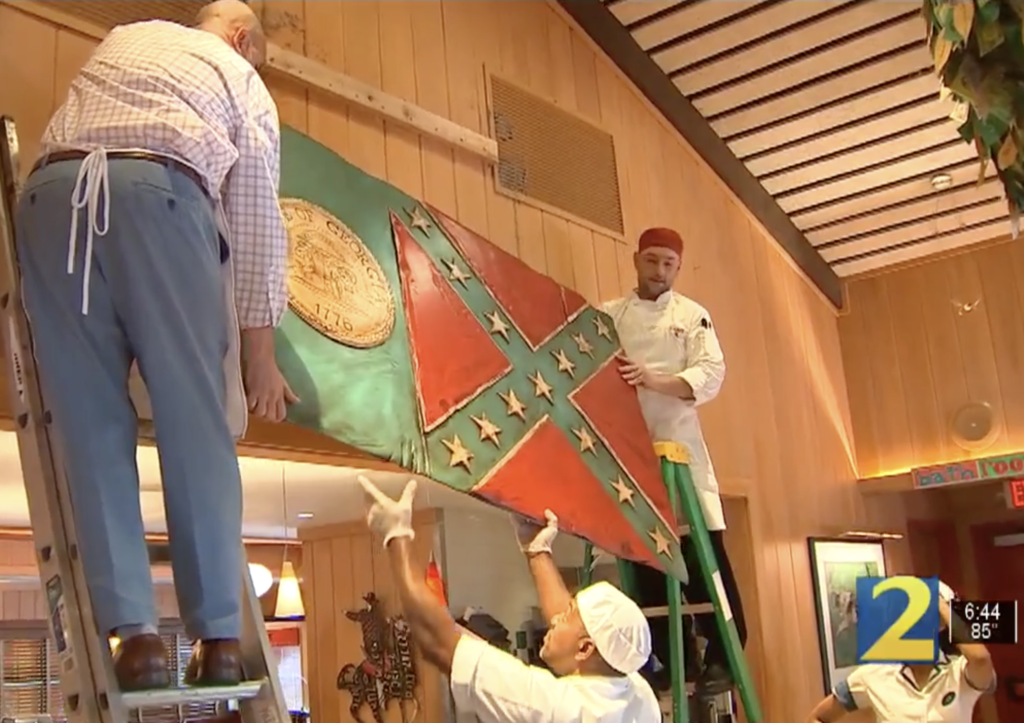 The flag, complete with a Confederate battle emblem, has been a point of contention in the community for years and resurfaced this week after What Now Atlanta (WNA) on Sunday broke the story of a cryptic banner DeRose hung outside the restaurant stating “Lives That Matter Are Made With Positive Purpose.”

DeRose’s banner was put on display as Black Lives Matter (BLM) organizers are leading protests worldwide to shed light on police brutality and systemic racism and was met with great backlash both locally and nationally.

That banner earlier this week was taken down and replaced with one that states, “OK Cafe Loves America.”

LaeTania M. Richardson, a longtime admin of OK Cafe’s parent company Liberty House, told WNA she is “overwhelmed with emotions” at the coming down of the flag, something she’s been fighting for as an African-American woman.

“[DeRose] knew for years what that flag represented to many of us,” Richardson said.

“It’s a new day at the OK Cafe! Now, hire some minorities in a position of management!”

Richardson said when she worked for DeRose part of her job was to email disgruntled customers the restaurant’s justification for the proudly-displayed the flag.

DeRose later provided this statement to WNA regarding the flag removal:

We took down something that was a part of OK Cafe’s history for 33 years, the craved wooden Georgia flag.  Many of the staff hated to see it go, some were indifferent, perhaps some thought it right, but many customers will feel we “folded.”

I did it because threats against us were called in yesterday. The several calls said a march was planned next week to take down OK Cafe and burn the flag. They were considered credible threats and home security were monitoring. I didn’t want the wonderful people who work at OK Cafe (and many for decades) to be harmed over something like art, so I decided to take the piece down and commissioned another piece to put in its place.

When the art piece came down there was a moment of melancholy, then we ( OK Cafe’s staff) applauded our decent and right actions. Its time we move on. There were customers present who asked me why but I suppose they didn’t understand how sensitive this has become and how much negative energy it is producing. It takes away for our mission to serve and make the world a better place.

In closing all this,  let me make this one point perfectly clear:  none of us are racist (the current scarlet letter). And all of us hope all the meanness toward us is over now. We have nothing left which might offend. We have only open hearts, good food to kind serve.

A bowl of drama, a slice of humble pie, and sweet tea please…

LoL, for real!!! She’s always been so contradictorily about what it “stood” for. She defends it but damn well knew what the confederate army was about. She brought the war right to her front door this time.

About time it came down.
I don’t want to give my money to a white supremacist though, so until the current owner sells, I don’t think I can go back there.
And giving the sales proceeds to the police department? That’s tone deaf at the very least.

The damage is done. She can retire or sell, I won’t be back till then.

Auction it off? Why not burn it. Some Nazi, red neck can buy it and hang in their home. BURN IT!!

Or throw it in trash. It’s white trash memorabilia

Sorry, but Ok Cafe has lost me for life already. Way too little, way to late..

So… If you are threatened you give in? Is that how you propose to handle someone or a group that threatens you, your business or your property? Sorry snowflake. How much for the carving outright, right now! I’ll hang in where ever I please.

Get it, I think it would look great on your garage floor!

LOL at all those saying they will not go Doubt you go there anyway. I wil go wherever good food is served. I don’t give a damn about the owners political leanings, beliefs etc etc   But I dang well could bet my life that none of you soft complainers are doing one thing about the FACT of 16 to 40 year old black males #1 cause of death is getting shot and killed by ANOTHER BLACK MAN. Go march in the hood to stop that. No you won’t do it because you are scared you will get shot. Atlanta… Read more »

I’m glad she took it down, but I don’t think she took it down for any other reason than she saw her business failing because of it.
I also have no problem with her auctioning it off, and giving the money to the police department.
It’s her right to do so.
I’m thankful for the good cops out there– it’s an unappreciated community just like school teachers.

She is going to auction it off and give the proceeds to the police force? Not quite a total reversal. Still not ever going to eat there.

NONE OF US ARE RACIST? but yet you were displaying a symbol of hate for over a 3 decades What will you be posting now? A OK hand signal

Auctioning it off to the police??! WHAT THE ACTUAL F*CK. They might as well paint it on the front of the building b/c it’s clear where they stand. Disgusting.

I don’t think Ms. DeRose fully understands or even cares what “BLACK LIVES MATTER’ mean or what the confederate flag means.

I don’t think Ms. DeRose fully understands or even cares what “BLACK LIVES MATTER’ mean I agree, but there’s absolutely nothing requiring her to do so. Her mistake was slapping her personal feelings on the outside of her business. And she will most likely financially pay for that action. I think she, like many other people, were horrified by the mass destruction and looting that we saw around the country on the news every night.   Burning a neighborhood Wendy’s to the ground does absolutely nothing for the cause. Actually it’s just the opposite, a franchisee (possibly minority) lost something… Read more »

It gets white people to pay attention. The burning of that Target made George Floyd a household name.

Great way to make an impression and get people to rally around your cause.
Two black-owned businesses, and an Indian owned business in my neighborhood have been looted.

We’ve been screaming BLM for years and have been trying to get people to rally around our cause. You should’ve paid attention before people started looting stores.

And sucks that minority businesses were looted. But maybe you should try caring about minority lives as much as you supposedly care about our businesses.

You make a lot of assumptions about me.
Not surprising though…

I have only visited the OK Cafe on a couple of occasions. But I do know, through talking to the staff there, that the owners go out of their way to hire single mothers… and 50% of those mums are black. That proves to me that these owners are not racist, but are trying hard to help a well documented problem of broken family’s in Atlanta. Having read the article about the flag… let’s remember this is an Artwork. Art is meant to make people think. In the case of women’s rights it was a symbol of equally and hope,… Read more »

A flag (even a stylized one) is a design product. This wasn’t some high art piece that was created to make people reflect on the meanings of the flag. Design is when you apply art for practical purposes – like conveying a political message.

Also, hiring black people or having black friends doesn’t say anything about whether you’re racist or not. I can think of some historical examples of people that “employed” a lot of black people that weren’t exactly beacons of progressive views on race…

Wow, America really is doomed. That is the most uncivilised and uncultured reply! You portray yourself as an art critic, psychologist and race expert… maybe I should expect nothing more from a race that is barely out of nursery on a global timeline of civilisations. It’s sad that women who gained equality under that flag so readily forget the sacrifices made for that cause and now take that freedom and equality for granted – like nothing ever happened. Americans have a very short history, my advice would be to learn it and contemplate the key events rather than jumping on… Read more »

You sure do sound like Susan DeRose harping about how “women gained equality under that flag.” Which is not actually true and you both might want to revisit history yourselves. Women never gained equality in the U.S. under *any* flag, because the Equal Rights Amendment was not ratified by enough states (and ratification votes were defeated in both houses of the Georgia legislature.) What the *U.S. Congress* passed into law in 1964 were protections against discrimination in employment on the basis of sex through Title VII of the Civil Rights Act. All but 1 GA congressman voted against the bill.… Read more »

Take it from an ex employee of over 3 year…she’s racist!! There’s many untold stories the media doesn’t know about but all the employees know

I didn’t realize the flag was there until a couple years ago. I wrote a letter to express my concerns as an African American, but to no avail. I can’t understand why the owner couldn’t understand why this was offensive to intelligent thinking people.

'It seems that we have found our company in an unusual—and perhaps dangerous—situation' but 'if loving America is wrong—I don’t wanna be right,' Susan DeRose sent in an email to customers Saturday.

Yendelela Neely Holston writes, 'I hope that anyone reading this letter—who has asked themselves what they can do, how they can transform outrage to action, how they can move from emotion to progress—will join me in refusing to patronize OK Café, Blue Ridge Grill, and Bones.'

'...Have you wondered yet; who will be held responsible to repay all the business owners for their losses? Will it be Black Lives Matter? Will it be regular taxpayers who did nothing wrong?...'