This post is an update of: [Exclusive] Delbar To Replace The Daily Tavern In Inman Park 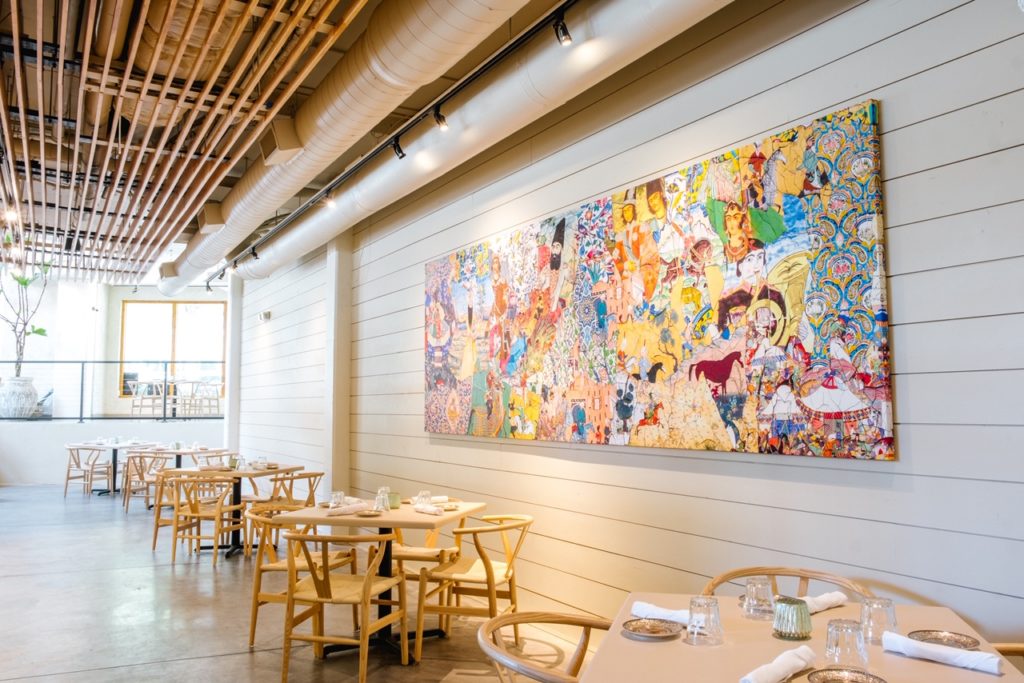 Born and raised in Gorgan, Iran, Chef Fares Kargar grew up on the food that his mom, aunts, and grandmother cooked. He left Iran at 17 and worked in Turkey as a refugee. His initial dream was to study architecture until he got his first job in the restaurant industry.

“I just fell in love with it,” Kargar said. “And my dream changed to one day opening my own restaurant.”

Kargar would soon migrate to the U.S. and study hospitality at Georgia State University while working his way up to the culinary ladder. Years later, Kargar, now 31, finally opened his own restaurant where The Daily Tavern used to operate in Inman Park in the beginning of July. They will serve food with influences from Israel, Turkey, Iran, and Lebanon.

“So what we focus on is just Middle Eastern food in the simplest way with the most original recipe, just create the food that everyone grew up eating, just like myself,” he said. “It’s the food that your grandmother would put on the table, that your aunt, your mom made when you were a kid back home.”

The food at Delbar will feature shareable spreads such as hummus and kashk bademjan, an eggplant-based dip. The menu will also feature a mix of meze (small plates)  and heavier meat platters. A Persian-based beverage program will accompany this menu with ingredients imported from Iran like barberries, cardamom, and Persian dried lime.

These ingredients and flavors all serve to bring Kargar’s home and memories to Atlanta.

This goal translates to the location that Kargar is operating in. The walls and floors of the 2,800-square-foot space are a lighter, natural tone, and the chairs keep their natural wood grain patterns. “What we were going for is to represent the countryside of Iran,” Kargar said.

The name “Delbar” in Farsi translates to “heart, captured.” More accurately, it’s a Farsi term of endearment for someone who has stolen or holds your heart. True to that name, Kargar hopes to recapture the hearts of those who came from the Middle East.

“This is what we’re trying to do with every guest that comes here,” Kargar said. “To take their heart away and make them fall back in love with their origins if they’re from there.”

For those whose homes lie elsewhere, he wants to show them his culture in the hopes that they fall in love with it too.

“To me, food shows you the culture,” Kargar said. “So that’s basically what we’re trying to do, trying to get people to imagine and live that culture.”

After dreaming about a restaurant since the beginning of his culinary career, Kargar has filled Delbar with intention. The dream and vision that has been in his head for years is now a reality, shown in the decor, the logo, and the menu, all personally designed by him.

“I just want this to feel like a part of me or as close as I can get to that.”

What a great story! Love hearing success stories about hard-working immigrants! The last two restaurants in this space were not appealing to me at all. This space looks beautiful, and as a neighbor, we will be supporting them. Love me some Middle Eastern food!!!   I used to work for an Israeli dude in NYC. His parents (Mom was Syrian, Dad was Israeli) would come for a month every year. I swear his Mom would cook all day long, every day. It was sooo yummy and I really loved experiencing so many of her dishes and being somewhat immersed in… Read more »

Wow, just checked out their menu.
I think this might be our Friday night dinner this week. Yum!
5 stars on Yelp!

I’ve gotten takeout from Delbar four times since they opened and it has been excellent every time. Thankful to have very good Persian food in our neighborhood. I also shared with people who do not eat as much Persian food and everyone was a fan. Highly recommend!

I’m in no way affiliated, just a fan of the restaurant and want to support great restaurants in our neighborhood staying in business through COVID…this can’t be an easy time to launch a new restaurant.

We can’t wait!
I already know what I’m ordering tomorrow night. We’ll probably order enough food for a couple of dinners.
Walking up for curbside pickup.
I really want this space to be successful, and I think this is the perfect eatery for this location.
That patio looks lovely– we won’t be dining-in anytime soon though.
Support your local businesses!!!

OMG, we waited two hours for our food.
But once we got it (curbside pick-up), it was AMAZING!!!
This is by far some of the best food in Inman Park!
BTW, they comped our whole $80 order because we waited so long– and we didn’t even ask for that.
So good, cute staff, and delicious food!!! Y’all gotta go.

'Closing has nothing to do with the coronavirus' but rather Chef/Owner Kevin Rathbun couldn't come to terms with landlord Asana Partners.