The Virginia-Highland restaurant will reopen as 'Taco Cowboy' Oct. 19.

Tom Catherall is being forced to change the name of his newly-opened Virginia-Highland eatery Tom Tom after “long and very expensive court battles.”

The Atlanta restauranteur lost the name to his former wife and business partner Leigh Catherall, president and COO of Here to Serve Restaurants (H2S), Tom posted to his personal Facebook page Thursday.

The news comes nearly one year to the day all of the H2S concepts – ten in total – shuttered without warning.

Tom Tom, at 1000 Virginia Avenue NE, will be known as Taco Cowboy effective Wednesday, October, 19, the company later announced in a press release.

The space, formerly H2S restaurant Noche, got its moniker from the nickname Tom’s dad called him as a child.

“I will still be in the kitchen, at the same location, with the same staff and the same fresh ingredients as I always have. I’ll just be doing it under a different name.”

Taco Cowboy, which is the corporation that did business as Tom Tom, will open with a new concept and menu focusing on more tacos, tequilas, and small plates along with bigger steaks, according to the release, without service interruption.

“I’ll still have my Tom’s $5 margaritas made with cheap tequila and fresh lime juice as well as the existing taco menu,” Catherall said.

“I will incorporate more ‘cowboy’ into the menu by offering a larger steak presence with more relaxed attitude.” 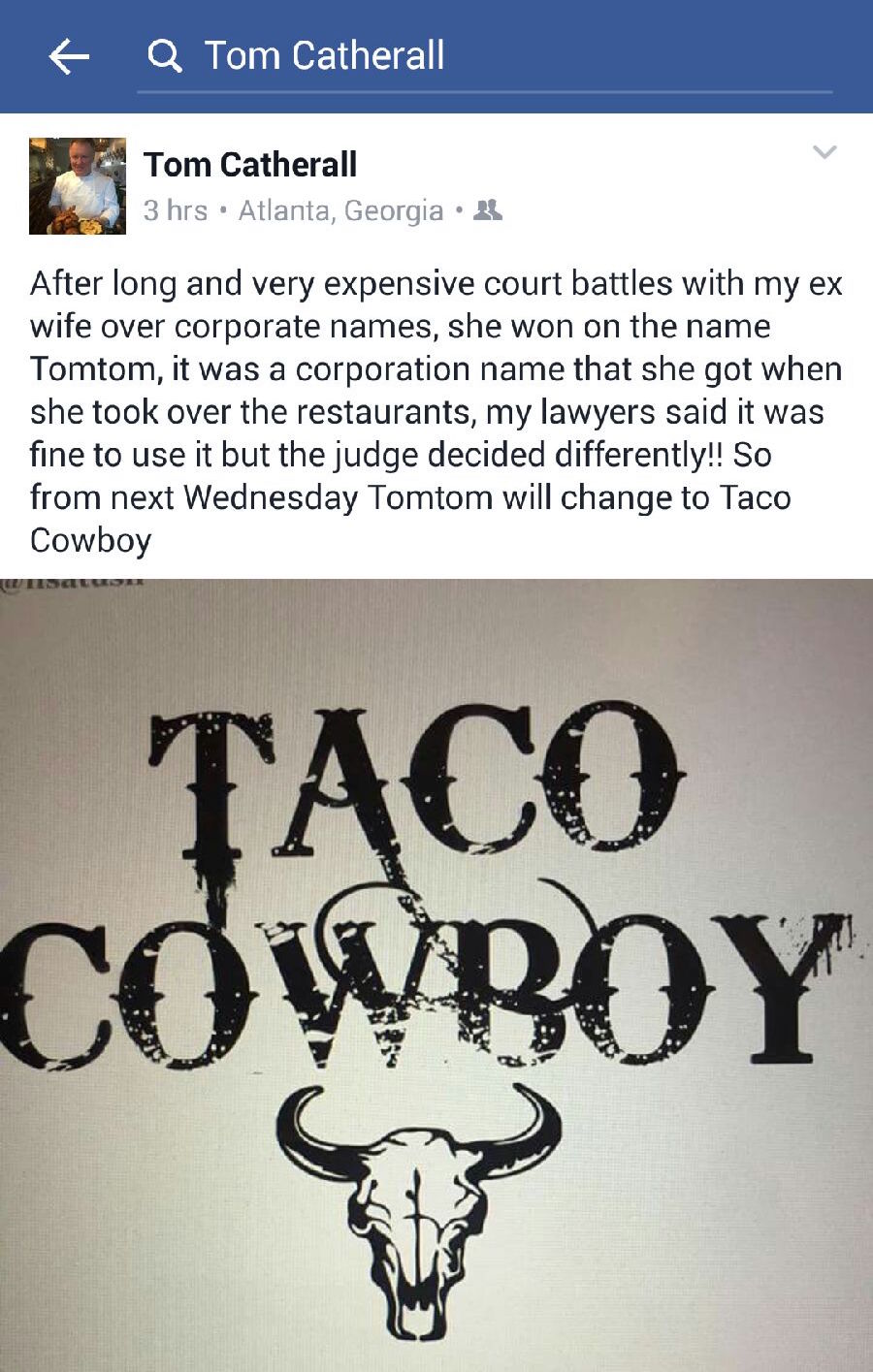 Vegan Cheese Could be Coming to Irwin Street Market

The name of the typeface they used for that logo is “Bleeding Cowboy.” Not exactly what I want to think of when I’m dining out. It also happens to be one of the most-mocked typefaces by graphic designers, exceeding the classic Comic Sans.

It was important to say that first, but—holy crap. Lady, you sued the man to take away the nickname his father called him as a child. That’s cold af. Maybe he deserved it, but DANG.

This guy just gets his ass handed to him every time from his ex-wife. Geez! Lost another lawsuit over a silly name.

Leigh Catherall should spend her effort and resources finding a way to pay her former employees their wages still owed, instead of wasting it on frivolous lawsuits that mean and accomplish nothing.

Lol, this woman is CRAZY!!

She should also pay back everyone left holding a gift card that is worthless. I would think if Tom was an upstanding businessman, that he’d also honor those gift cards. I guess he doesn’t care if we continue as his customers. He’s probably just selling new gift cards and trying to screw people out of money and run away again. He should feel some obligation and responsibility to the customers and employees that were done wrong by his family, ex or not. He was just a coward and ran away to live on the beach in Florida until the dust… Read more »

In the know
Reply to  Former Loyal Customer

Dear Former Loyal Customer, You should take up your angst with the woman who drove the company bankrupt, and not the man who is trying to start over. She’s the one who screwed you out of your gift card monies, it was in good standing when she took over. As per the divorce agreement, she would buy him out by making payments. She drove the company into the ground, he got nothing. So, lets say you (Jane) give Tom $20 to hold for you. Then I come along and give Tom a check for that $20 and register an IOU… Read more »

Buckhead and at least four currently-undisclosed locations nationwide will host iterations of the exclusive speakeasy and usher in patrons through phone booth entrances of their own this year, according to franchise-owner Stephen de Haan

Washington D.C.-based Medium Rare specializes in — and only serves (aside from a vegan substitute) — steak frites. Owners Mark Bucher and Tom Gregg aim to bring their simple model to 26 states, including Atlanta, within the next five years

After losing his medical sales job in March due to the coronavirus, Louis Kramer decided to follow his dream and open the restaurant, named for his family of seven.