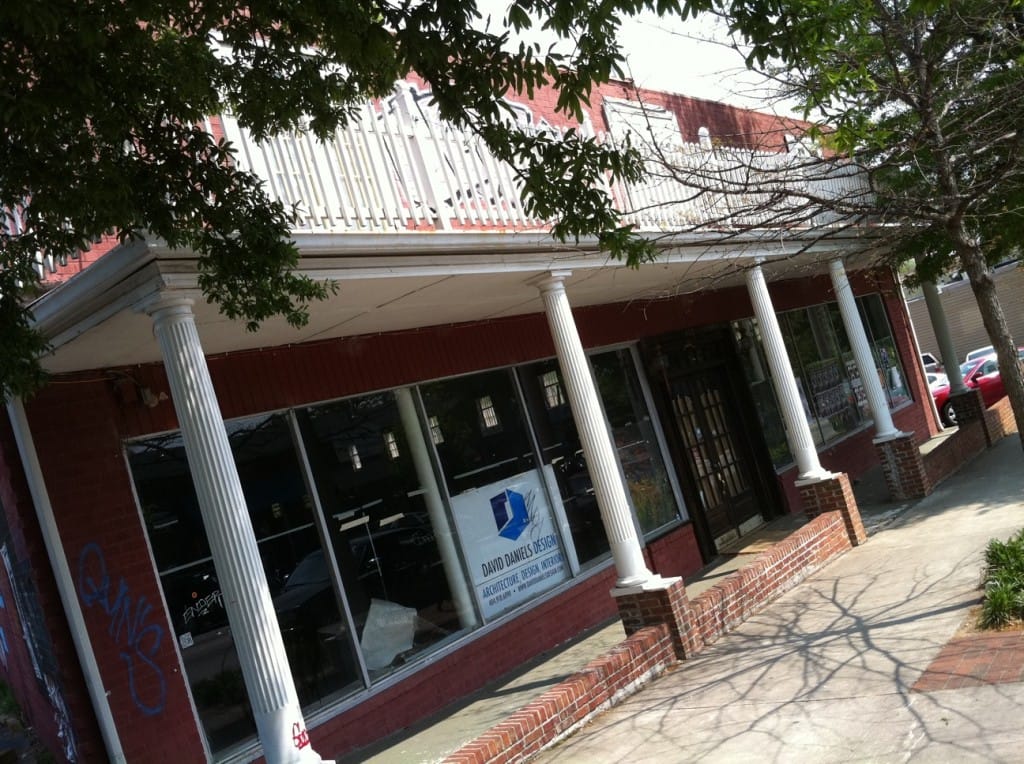 
When we think of dining in the East Atlanta Village (EAV), a few words come to mind: bar food, grungy and smokey, to name a few.

Ben Rhoades, owner of MJQ and Bookhouse Pub, is about to change all of that– or, so says he.

“We’re opening a nicer restaurant than anything else in East Atlanta Village,” Rhoades said in an interview Monday.

Nicest in EAV? Don’t set the bar too high for yourself, Rhoades.

Renovating a 7,500-square-foot space on Flat Shoals in EAV, Rhoades and MJQ managers Armando Celentano and Donald Durant, are in the process of transforming the former East Atlanta Art and Antique Bazaar into a “Brooklyn-style” restaurant– the trio filed a building permit with the city last month for a commercial conversion.

So what’s a “Brooklyn-style” restaurant?

“You can order food being cooked outside, at the bar, or from a waiter,” Rhoades said.

Think of it as an informal dining experience, Rhoades explained: you can order from the bar and then eat outside or sit down at a table, order and then move to a lounge or sofa seat.

Does make us wonder how they’ll keep up with tips.

Rumors abound suggested that the EAV restaurant would be part restaurant, part nightclub. Rhoades told What Now Atlanta that the new restaurant will never be a nightclub or even have live music.

“If you put a sports bar on one end of the spectrum and and a nightclub on the other, our current project is closer to the sports bar side,” Rhoades said. “We’re not in the nightclub mood anymore.”

Rhoades hopes to open the restaurant in time for the East Atlanta Strut on September 17, but said it’s unlikely.

“It will be open when it’s open,” Rhoades said.

How do I add this website to the deathmarch? Rumors abound suggest that C.J.S. is about to be consumed by his own ego. When it happens, will an announcement be sent out on Twitter?

What ego is in this? Is it because he puts opinion in his posts? I like that..makes it more interesting.

It sounds like you will not have to wait to be seated by some hostess at a table you dont want, or wait forever for some waiter to come take your drinks order, Yes please! Walk up to the bar, say 2 beers please, and sit where you like. Heaven.

So is it Brooklyn style like Pizza, or like dudes drinking PBR talking about their obscure vinyl collection?

The bar is set high in EAV. Go to Graveyard, the food is incredible. And they mix the restaurant and nightclub feel very well.

Hey all! This is the aforementioned Armando Celentano. Wanted to jump in here and clear a few things up. The “nicest restaurant” quote came off as a little crass although well intentioned. What Ben was trying to get across was that we want to provide a non-smoking gastropub environment akin to some of the nicer beer pubs and restaurants in Brooklyn or the Lower East Side. We are certainly fans and friends of every other bar/restaurant in EAV, and want to help the entire neighborhood grow and flourish. We are designing our menu to be unique to East Atlanta so… Read more »

“You can order food being cooked outside, at the bar, or from a waiter,” Rhoades said.”

What does that even mean? Food is cooked outside? By waiters? At the bar? Is it Bar Dim Sum?

I’m looking forward to having another dining option in the village, but nothing about this concept seems all that different than The Glenwood or Graveyard, based on this (rather informationally anemic) article.

0
Reply
Give em a break

Give them a chance to open before cutting them down. MJQ has been an Atlanta institution for many years for good reason. Then they added the Drunken Unicorn and the club complex got even better. The Bookhouse is an attractive bar with good food. These guys have good taste and I trust them to make something interesting and unique in their EAV effort. Admittedly Rhodes’ remarks don’t really come off as very clear in describing the concept, but jumping directly harsh criticism is being a bit of an internet cliche.

Finally!!: “Non-smoking” in the Village. I’m rooting for you guys, Armando. Can’t wait to see the finished product.

I’m not cutting them down, I just want to know more about what this place is actually going to be, because saying it’s gonna be the nicest Brooklyn gastropub in Atlanta doesn’t actually MEAN anything, and the descriptions in the article don’t sound so spectacularly different from other places already in the village. What’s the differentiator?

There’s been so much overblown hype around this development, I just want someone to reveal some real information about it with words that have actual meaning to people outside of the Brooklyn gastropub industry.

Armando – since it sounds like you’re still designing your menu, can I offer a request/tip? Please, please, please provide a vegetarian offering besides the ubiquitous pasta&sauce or veggie burger. While not a vegetarian myself, I happen to be married to one, and I know there are a decent number in the village and surrounding neighborhoods. While I’m quite intrigued by what it sounds like you have planned (and having it just a couple miles down Flat Shoals from my house), if there aren’t vegetarian options to interest my better half, I know that my patronage (and that of other… Read more »

To answer some of your questions- @Village Idiot- Sorry about the vagueness of my info so far. We’ve been working on this concept for the last few years and don’t want to tip our hand too early. It’s seriously not like anything else in EAV or all of Atlanta for that matter. The “food being cooked outside” quote was kind of a misrepresentation of what’s actually happening. There will be multiple cooking areas, but nothing outside. What Ben was trying to get across was that it’s going to be very casual as far as service. We want people to be… Read more »

Armando
I am very impressed in your follow up on this site to comments. If this is reflective of your service at the rest then I will be a regular. Good luck to you.

Armando – could you provide an e-mail address where I can contact you privately? Just wanted to share some information that I think would be of interest to you.

Armando – great follow up on comments. Love Bookhouse and glad you guys are establishing a presence in EAV. Can’t wait to try the restaurant, and best of luck!

Thanks to everyone else!

We are very excited to see this development come to fruition! It will be a great addition to the development of EAV. AND PLEASE..PLEASE….KEEP DOING WHAT YOUR DOING!!! meaning…we want to see a restaurant bar that IS like NOTHING else in ATLANTA or ESPECIALLY EAV!!!! we have enough local/neighborhood dive bars/taverns/watering holes/etc/etc/LETS SEE SOMETHING THAT IS NEW AND UNIQUE!!!!! This is the perfect opportunity and launching pad to add another dimension to the MJQ/Bookhouse empire. We look forward to supporting a new cutting edge, one-of-a-kind neighborhood chill spot that us EAVillians can boast about to our friends and family that… Read more »

I’m excited about this. I like the concept (what they’ve revealed, anyway) and I like how Armando is responsive to the comments on here. Looking forward to hearing more, and especially to having something in that space.

I echo the vegetarian request. I’m not one but used to be. And often order a veghead dish. I hate when the veg option is a yawn.

Why do I get the feeling that Brownsville or East Flatbush is not the ‘Brooklyn-style’ they’re talking about?

He’s lying it will be a nightclub, he just wants to catch the Earl and The Graveyard Tavern off guard. He plans to make it into something like Opera Nightclub.

First, I had to find out the meaning of gastropub. Don’t like the term gastro but I have the meaning now, lol. I think it’s great that Armando responded to comments to clear a few things up. I use to frequent MJQ back in the day when the club scene was fun. I hope the new restaurant is a success.

Will there be pool tables??? I heard rumors of pool tables and arcade games.

Armando, do you folks have a timeframe for when the new restaurant will open? And is my internet-sleuthing that it will be called The Argosy, correct? We are very excited to see what you are going to bring to the neighborhood!

@Flummoxed- Shooting for mid to late November. We’ll see if the state cooperates. No promises other than we are doing our best. Can’t wait to show it off. We’ve put in a lot of time and effort creating a truly unique and beautiful space.

Any update on the opening? The interior looks amazing! Can’t wait to check it out.

Former Watershed Chef de Cuisine will helm the kitchen in the Asian seafood house which is expected to debut in mid-October.