Construction on The Lost Druid Brewery started this week in Avondale Estates, according to a press release Friday.

An official groundbreaking ceremony will be held at 11 a.m. Friday, August 31 at 2866 Washington Street.

“We are excited to begin the transformation of a long-time industrial area into a vibrant walkable downtown community with an artisan focus for people from all walks of life to enjoy,” Stacia Familo-Hopek, owner and co-founder of The Lost Druid Brewery, said in the release.

“We have a lot of work ahead of us, but we have an excellent team and are confident of the outcome.”

The Lost Druid Brewery will be an “own-premise-oriented brewery, focusing on bringing beer lovers to the brewery’s taproom to enjoy its liquid refreshments rather than selling its beers through traditional retail channels.”

The 6,800-square-foot venue features the brewery, a cellar/wood-aging facility, kitchen, taproom and upstairs mezzanine with private event space, along with both front and rear pet-friendly patios.

Landscaping and bike racks will be found throughout the brewery grounds.

The taproom will feature 20 rotating taps, twelve of which will be served directly from the tanks that are visible behind a glass wall on the rear of the 43-foot long bar.

In an effort to be “kind to the environment,” the brewhouse will not “vent brewing vapor to the outside environment” and will “harness the heat being expelled during the brewing process to maximize the efficiency of the system, reducing overall energy consumption.”

The Lost Druid Brewery will have a “36kW solar array” on the roof to reduce the brewhouse’s dependence on energy generated from fossil fuels, and Its patio floors are being constructed of pervious materials to reduce storm water runoff.

The Lost Druid will begin hiring employees in January for an early-2019 opening. 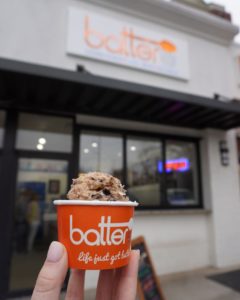 The Lost Druid Opens June 21 in Avondale Estates, Will Have 20+ Taps on Rotation

Ground is expected to break in January 2018 on the new craft brewery.

The $73.7 million, five-story development will feature 71 apartments and open during spring 2019.