Plus more updates on the boutique food market opening later this year in the Makers Building at Selig's The Works.

The boutique food market is opening later this year in the Makers Building at Selig’s The Works, an 80-acre adaptive mixed-use development in Atlanta’s “Upper Westside” neighborhood.

“Atlanta and the Southeast, in general, have a thriving culinary scene with some of the most notable restaurants and the most captivating food culture in the country,” Zimmern said in the announcement.

“At Chattahoochee Food Works, we’re recruiting the region’s top chef talent and setting the stage for them to try new concepts or menu items. The Works is a thrill for all of us at Passport. We want to make this a landmark and inclusive project for all because the food of the south is America’s food in every sense of the word.”

Zimmern and Montwaid previously collaborated on The Dayton’s Food Hall and Market in downtown Minneapolis.

For Chattahoochee Food Works, Zimmern will act as a culinary advisor to Montwaid.

“Very few people have tasted as many unique and exciting foods as Andrew,” Montwaid said.

“He has experienced the most exotic dishes from every culture around the world. Together, we’re excited to work with established Atlanta chefs and encourage them to experiment with dishes that aren’t served elsewhere, creating culinary offerings exclusive to Chattahoochee Food Works.”

Its outdoor area spills out onto The Spur, a quarter-mile linear park running through Phase One of the project.

Phase I welcomed its first tenant, Ballard Designs, in July 2018. 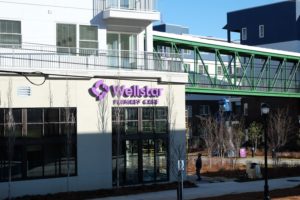 The BrickWorks development will house the yet-to-be-named entertainment venue.

It's the first glimpse at what's to come for the 30-stall food hall in Selig's The Works.