There is an update to this post: Bezoria and Noodle Shutter Ahead of Incoming 903 Peachtree Mixed-Use

Two permit applications for the project last week were filed with the City of Atlanta by the real estate development firm.

The first permit calls for the demolition of the existing single-story structures, at 903 Peachtree Street.

Those low-rise buildings are home to Bezoria and Noodle.

Yogi Patel, the owner of Bezoria, was surprised to learn permits were filed for 903 Peachtree.

“We have no clue what’s going on,” Patel over the weekend told What Now Atlanta (WNA.)

“The landlord has been kind of twirling us around as to where we are with everything. I guess they finally got the deal done.”

Bezoria and its neighbors will most likely be forced to relocate, according to Patel.

There is little chance the quick-service eatery would reopen at 903 Peachtree once it’s built.

“We would probably relocate as close to our current location as possible,” Patel said.

“We wouldn’t want to be closed potentially in the Midtown market for a year or two during the construction of 903 Peachtree.”

Demolition to the structures that were once home to Bakeshop and Benzino’s Crab Shack (which had a short six-month stint at the site) could cost $94,425.

Once complete, 903 Peachtree will house 417 residences and 12,000 square feet of ground-level retail.

CA Ventures on multiple occasions last week did not respond to WNA’s requests for comment. 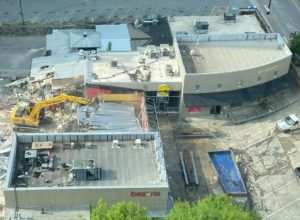 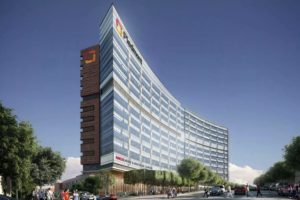 Chicago-based CA Ventures is clearing the way for a new mixed-use tower on the prime corner lot.